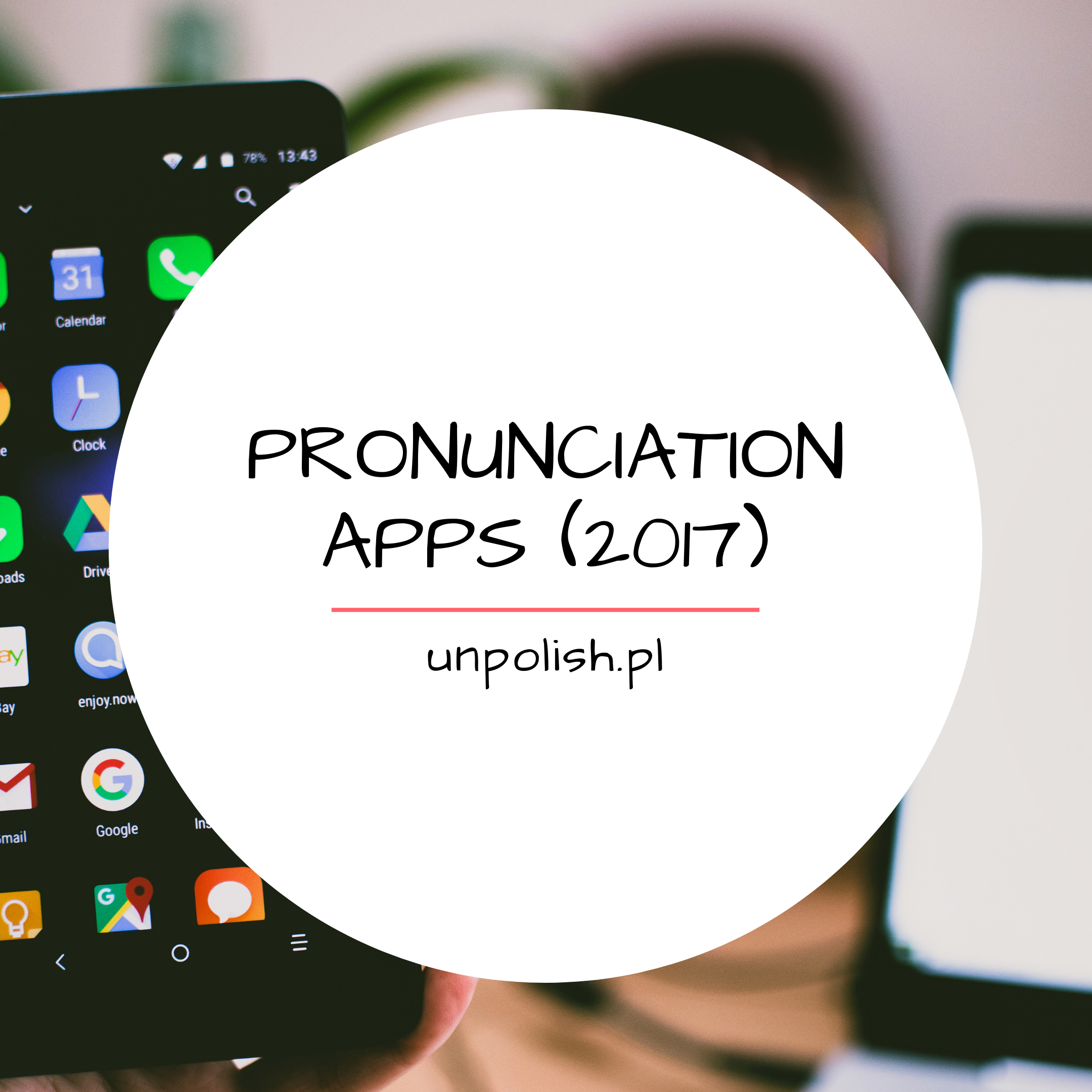 Below excerpts from Beata Walesiak’s article on mobile (Android) pronunciation apps available from Google Play in 2017. Full article is available from the Speak Out! Journal by PronSIG IATEFL.
The list reflects my genuine research and impartial preferences and is not endorsed by any of the apps’ publishers or developers.

AVPhonetics, developed by Resource Centre for Ubiquitous Learning & Integrated Pedagogy, Hong Kong, is a free 8-module app dedicated to the IPA chart (2005). It is an audio-visual IPA reference that covers: clickable consonants grouped with respect to their place of articulation, vowels presented in the form of a vowel quadrilateral and tonal symbols with a short discussion of the 1-5 Chao’s System of Tone Letters inspired by music (hence the flute used in the embedded audio recordings). All of the sound descriptions consist of a couple of lines of articulatory tutorials, something which may require prior knowledge of the articulatory setting, and further guidance from the teacher. Each sound is accompanied by an embedded audio, a cross-section animation of the speech sound articulation and, what seems most notable, a Praat spectrogram (a spectro-temporal representation of the sound). The only interactive part constitutes a falling-objects arcade game with, sadly, no instructions or encouragement to pronounce or repeat the falling sounds. Its main aim seems to be only to collect golden coins and a medal by clicking on one of the falling phonemes that can be heard pronounced by the instructor.

Elsa Speak, developed by ELSA, San Francisco, is a 5-module app (called respectively: Skills, Topics, Dictionary, Progress, Profile). The demo version offers the first two levels of each ‘Skill’ for free and a 7-day free trial of the full content once logged in. The levels include exercises focusing on different aspects of 12 pron-based areas referred to, a bit misleadingly, as ‘Skills’, i.e. consonant clusters, sound endings, short and long vowels, aspiration sounds for e.g. ‘/s/ and /sh/ contrast’. Each ‘skill’ is represented as a planet in space. The tasks that come under each are set in context, hence tagged according to a given real-life thematic category, e.g. Career path, Environment, Business, Health, Beauty, Relationships and Education, which can be also accessed via the ‘Topics’ module of the app. One of the noteworthy affordances is the interactive profile of the app. The tasks are clickable and marked with relevant images for the user’s comfort. To illustrate, the image of headphones stands for a minimal pairs exercise in which the user needs to listen and tap the word they hear; speech bubbles stand for reading and recording utterances in real life conversations, and a bar chart denotes an exercise with recording a word paying attention to placing stress on the right syllable.

The app seems complex but it is, in fact, quite intuitive. However, the user-friendly feedback it provides requires some attention from a specialist’s point of view. Once the user’s input is analysed by the SR as incorrect, the user may only replay their answer for comparison and receive written guidance on how to move their articulators to correct their utterance. Moreover, at the end of each task the user receives two types of feedback: a Sound Pronunciation Score, which evaluates only the focus sounds being taught in a given level and the Overall Native Speaker Score (on a scale: Beginner, Intermediate, Advanced, Expert), which evaluates all pronunciation, intonation and stress in a given lesson. The % score indicates how close one speaks when compared to an American (Midwestern accent). Personally, I would be curious to find out more about the basic assumptions of the algorithm Elsa uses for the nativeness-reflecting score and see how exactly the speech is analysed.

The last ‘Dictionary’ module lists phrases that the user has had problems with and that require more practice. The app allows the user to check how to pronounce a given phrase with the help of some external video content powered by Youglish.com. This, and the remarkable game-based style of the app, definitely guarantees a more authentic learning experience for users worldwide (even though the app was originally devised only with the Vietnamese users in mind) and explains the enormous popularity of the app.

English Dialects, developed by Adrian Leemann, Cambridge, is a free 4-module app containing the following sections: Dialect Quiz, How? Where? Record, Info. Each module collects data on the way the user pronounces the words provided. Based on the Survey of English Dialects conducted in the 1950s and 1960s, the app analyses the user’s answers and localizes their broader dialect region on a map of the UK. The Dialect Quiz comprises 26 multiple-choice questions with embedded audio recordings and transcriptions of words as pronounced by speakers of various British dialects. Not all questions are focused on the way the speaker pronounces a particular word. The user is also asked to indicate the lexis or grammar structures they use when they speak while the app itself collects data to enhance its database and provide more adequate feedback. Two additional functions are available: first, the ability to record oneself and listen to the recordings by other users worldwide or historical dialect audio. The other feature enables the user to explore where a particular pronunciation variant is used.

Although the app seems to have been devised with native speakers in mind, the use of thematic maps that position the participant of the quiz in a different region is suitable for teaching non-native speakers about various dialectal features of different regions of the UK or conducting accent awareness-raising projects.

How to speak English, developed by Kaplan International Colleges, London, is a free 3-module app that offers pronunciation exercises based on segments using a Standard Southern British English model. The first ‘Challenge’ module offers 6 levels of tasks with 10 pairs of words in each to listen to and choose the correct word in a pair.

It is, however, the second module called ‘Your Sounds’ that seems the most attractive. The user is asked to choose their language from a list of 15 and to familiarise themselves with a list of the English sounds which may be difficult for the speakers of their language. Having analysed the most troublesome, the user may opt for the sound that interests them most and watch a 2-minute tutorial with a female instructor providing the articulatory instruction for the sound, including the side view and the front view of the instructor’s mouth. This popular format was initiated in 2009 by the BBC’s Pronunciation Tips, a popular video course offered on the BBC Learning English website. The user of How to speak English is encouraged to repeat individual words and sentences and video-record themselves using the front-facing camera of their mobile phone. The video can be then replayed and compared against the instructor in the original. Unfortunately, the app is not advanced enough yet to provide image recognition or provide automatically generated feedback on the user’s progress.

Finally, the ‘All Sounds’ module provides an IPA chart available for British English with a chance to watch the same video tutorials as in the second module. If audio mode is selected, an interactive exercise appears and the user may watch a quickly disappearing soundwave at the top of the screen or record themselves to obtain their own soundwave. Unfortunately, there is no possibility to pause and see both waveforms simultaneously for the purpose of analysis, which would certainly require some reprogramming.

MinimalPairs, developed by Mobi-Learning Inc., Toronto, is a free 5-module clickable app that features a simple interactive phonemic chart with a choice of 28 symbols (17 consonants and 11 vowels), including, somewhat surprisingly, a separate slot for the /ŋk/ cluster, the use of /ɜː/ for /ɝ/ and /α/ for /ɑʳ/. Once the user clicks on the IPA symbol, they can hear the corresponding sound and, after a double-click, an exemplary word with a simple illustration. This is great with children, as it guarantees visual stimuli and comprehension support. In the ‘Learn’ section minimal pairs are tested with images and audio for ear training. As stated by the developer, the app contains over 170 words matched in 95 pairs illustrating 19 contrasts.

In ‘Practice’ and ‘Quizzes’ the tasks are twofold. The user is either asked to listen and choose the right word or the right graphic representation of it, or listen and write in the word. The progress is measured in a daily performance bar graph and an attempts line graph. Even though the content of the app is quite modest, as it only features segments, the choice of words is rather random and the feedback not too meaningful, the app could be incorporated in the classroom for quick pairwork exercises and group practice supported by the teacher’s expertise.

Perfect English Pronunciation, developed by Victoria Productions NYC, New York, is a 4-module demo app that provides only a few sections for free. The app features a female lizard avatar who speaks in a computer-generated American accent and serves as an instructor to help participants  reduce their accent. In the ‘Getting Started’ demo module the user is offered a few open (i.e. available for free) tasks related to retraining articulators, consonants and vowels. The 'Jaw Exercises’ video in the ‘Retraining Articulators’ section is especially noteworthy, as it provides some convincing jaw-relaxing exercises (front view only), which may be very attractive to learners. The other sections are not available in the demo version or are limited only to simple graphics (face or tongue diagrams), short descriptions of the sounds or exemplary words with no embedded audio.

In ‘The Difficult Sounds of English’ module, the app features consonants (e.g. <th>, <r>, <l>, <ng>) and vowels (e.g. /æ/, /ɝ/&/ɚ/, /ʌ/, /ʊ/). Each sound section is subdivided into: Definition, Feeling the Placement, Hearing the Placement, Applying the Placement and Sentence Examples. Only some sub-sections are available for demo purposes such as: the <th> video with the articulatory instruction (written and read out by the instructor), the <j> video with the placement of the tongue (side view, visible movement of the tongue) and the <ng> video with an explanatory tutorial of how to articulate /ŋ/ correctly (side view, movement of the tongue, using a finger for finding the right tongue position). No free videos are available for the vowel sounds.

The next ‘Rhythm of English’ module focuses on syllable stress within words and word stress within sentences. Unfortunately, as there are no free videos in the demo version, the user can only rely on short general descriptions of some processes, such as vowel reduction or operative and inoperative words (i.e. content and function words) with a suggestion for practicing the natural rhythm of English speech.

The final ‘Applying to Professional Speech’ module promises to focus on the practicalities of delivering business presentations referred to as ‘pitches’, which initially might be a bit misleading. These focus mostly on marking challenging segments, as well as content and function words.

Sounds, developed by Vivid Interactive for Macmillan Education, London, is already a classic when it comes to pronunciation apps. The demo is a free 4-module resource with handy clickable British and American English phonemic charts featuring the voice of Adrian Underhill for the British sounds. It also contains two game-based practice and quiz tasters rehearsing and testing 5 words at a time. It is a great tool for practising reading and writing transcription, as well as establishing correlations between spelling and pronunciation. Still, it is not error-free. When typing in the transcription with the use of the phonemic keyboard, the user needs to think twice before providing the answer, as they may not be able to edit them and thus ‘lose a life’. The additional ‘More’ module includes an introduction to the chart, which may come in handy for a general introduction to the IPA chart in the classroom.

More posts on mobile apps for pronunciation to appear soon. In the meantime, feel free to join my Mobile pronunciation apps group on Facebook.